The Australian continent is often compared with the mainland United States.

Both are land masses and both populations are predominantly English-speaking. Both have a ­recent heritage of European settlement. Both are liberal democracies that value free speech and free trade. And both are generally free of large-scale corruption, with strong institutions, operating under transparent rule of law.

In many ways Australia would fit quite nicely as another US state. In that case we would rank third in population after California (39 million) and Texas (27 million) and ahead of Florida (20 million).

On the other hand, there are vast differences between the US and Australia. America has 325 million people, 13 times Australia’s 24 million population. The US is the most powerful economic and military force in history.

However I would argue that in relative terms the Roman Empire which prevailed for 500 years (against the American empire’s less than 100 years) was more dominant in its time.

The largest US urban centre is greater New York, with 21 million resident spread across four states. Greater Los Angeles contains 19 million while Chicago has 10 million. The three largest US cities contain 50 million people, 15 per cent of the national population.

If Sydney (5.3 million) were in the US it would rank 10th between Atlanta (5.8 million) and Boston (4.9 million). Australia’s three largest cities contain 12 million people, just under half the national population.

Middle America and Middle Australia are two very different concepts: the former is small town and folksy; the latter is big-city and suburban. 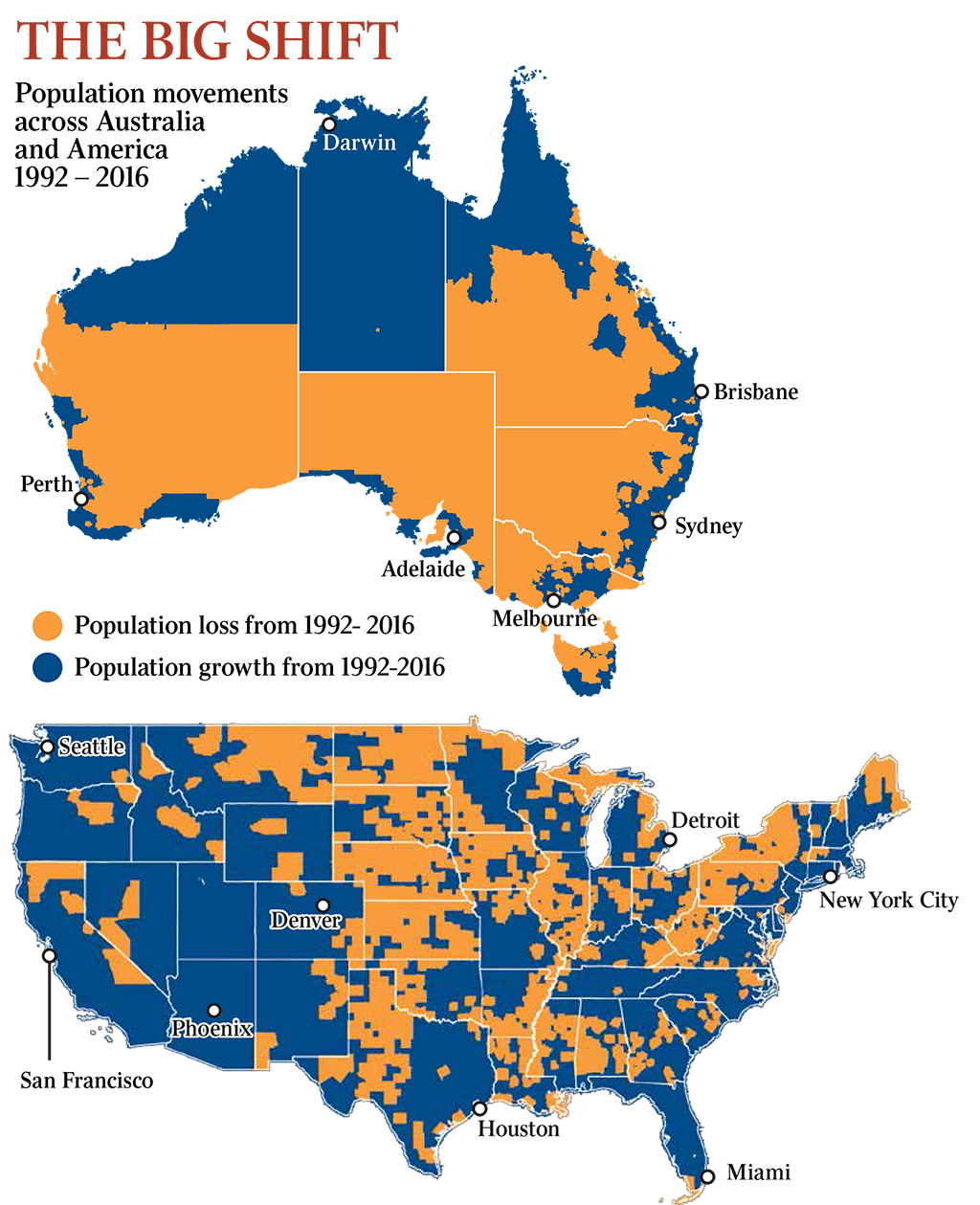 Australia evolved as a British dominion and remained so in effect until the last couple of generations. The split with Britain came in February 1942 with the Japanese bombing of Darwin prompting prime minister John Curtin to plead with the US to intervene. Which it did, decisively, at the recently commemorated Battle of the Coral Sea. Within a decade the ANZUS treaty was signed, confirming our switch of strategic allegiance from Britain to the US. Australia’s cultural linkages with Britain have continued through immigration and connectivity; Aussies still traipse off to London to see the world.

But modern Australia is very different to the outpost that emerged after the war. I am not convinced the Americans have gone through the same kind of transformation.

The bedrock of Australian demography remains Anglo and in fact the largest non-Australian born populations are still British and the New Zealanders. But there is a new and deepening demographic topsoil emerging, especially along the east coast, with immigrants now arriving from China, India and Arabic speaking countries. Almost a third of the Australian population was born overseas.

The US is different. Issues of social cohesion are less likely to stem from immigration than race. About 4 per cent of the population of Pittsburgh (2.3 million) was born outside the US. In the Victorian township of Horsham (population 20,000) the proportion is 10 per cent. It could be argued Horsham is more cosmopolitan than Pittsburgh. About one American in six was born outside the country, which is roughly half the Australian proportion.

But, then, comparing the worldliness of Middle America with that of Middle Australia isn’t a fair comparison. Australia is significantly more of an immigrant nation. The average Aussie is more likely to have family abroad. And besides Americans are generally unimpressed by anything outside their borders, whereas Australians (and New Zealanders too, I suspect) are impressed by anything outside their home country. We regard travel and food as proxies for sophistication, which is perhaps understandable given our remote and colonial heritage.

Americans live within the vortex of the greatest economy on earth, which I imagine is a bit like living inside a black hole. So powerful are the nation’s gravitational forces that little escapes.

Take New York City, for example: there are bigger cities such as Tokyo (38 million), Karachi (28 million) and Shanghai (24 million) but the combined market capitalisation of the NYSE and the Nasdaq is more than double the value of the world’s next largest financial centre (Hong Kong-Shenzhen). Why leave New York for a lesser market?

The same logic applies to Silicon Valley. Yes, there are other cities and countries offering business and lifestyle opportunities but nothing can compare with the scale of what’s on offer within America. It’s easy to be outwardly focused from Australia and New Zealand; it’s much harder to be so from within the US.

The accompanying maps show net change in population levels across both land masses over a quarter of a century to 2016. Over the period Australia’s more generous immigration program delivered net population growth of 38 per cent, whereas for the US the rate was 26 per cent.

Including natural increase, America added 67 million people, where Australia added 7 million. Both nations are young and vital and are remarkably generous in their inclusion of immigrants. Both nations are places of hope and aspiration.

From the altitude of a generation (1992-2016) the Australian people have lifted representation in the tropics and in the cropping and grazing lands of the interior.

From the western slopes of the Great Diving Range almost to the West Australian coast the demographic diminution has been unrelenting, driven by changes to the farming model where small holdings are aggregated to form bigger holdings and where mechanisation has dispensed with labour. Across the Wimmera, the Mallee, the Riverina, the Eyre Peninsula and the Upper and Lower Great Southern of Western Australia, the demographic erosion has continued at about 1 per cent a year.

The US story is similar with farm-based demographic erosion sweeping south from the Dakotas through Nebraska, Kansas, Oklahoma and into Texas.

There is also a story of demographic retreat along the course of the Mississippi and especially in Arkansas. In Monroe Country, Arkansas, the population has dropped from 11,000 to 7000 or by a third in 25 years. Losses in upstate New York and across western Pennsylvania are more likely to be associated with changes in manufacturing.

On the other hand there are clear preferences across both land masses for denser settlement along Australia’s lifestyle coast and in America’s sunbelt. The west coast, the southwest, the south as well as Florida have attracted Americans for a generation. Over the 25 years to 2016, the number of people living just outside Dallas in Collin County jumped 647,000, while in nearby Denton County the jump was 509,000 and in Fort Bend County outside Houston it was 376,000.

The closest Australian places to these housing hot spots would be municipalities such as Wyndham and Melton on the western edges of Melbourne.

The common denominator that I see between the US and Australia is the compelling interplay between lifestyle and aspiration. Farming and small-town manufacturing no longer support the opportunities they provided a generation ago.

New economic and lifestyle models are being pursued that favour retirement landscapes (sea-change, tree-change and in the US desert-change) as well as liberal can-do “open” cities offering scope for growth and development and also, I suspect, for personal economic transformation.

Come to Collin County, Dallas, or to Truganina or Tarneit, Wyndham, and build for yourself and for your family an aspirational lifestyle. On this score ,Australia and America are perfectly aligned in what they have to offer both residents and immigrants.

Bernard Salt is a KPMG partner and an adjunct professor at Curtin University Business School. Research and mapping by Cody Phelan and Simon Kuestenmacher